Art in the Sanctuary 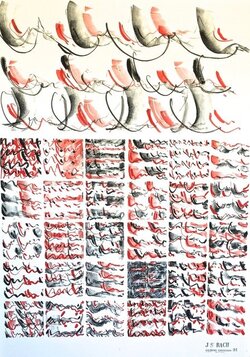 In the Spring of 2009 Quercus, a Raleigh-based string trio comprised of
cellist Bonnie Thron, violinist Carol Chung, and violist David Marschall
decided to perform Dmitry Sitkovetsky’s transcription of JS Bach’s
Goldberg Variations. David approached me with the idea of creating a
visual representation of the music. As a retired architect I was intrigued by
the structural aspects of the Variations and became enthralled with the
music ultimately producing over fifty paintings and many drawings.
I was actually painting the music. The paintings were done in real time - in
synch with the music, featuring a visual representation of the music. Some
were created during Quercus performances. One was painted during the
Pennsylvania Sinfonia Orchestra, Allentown, PA, performance of the
Variations. Many were created while listening to Glenn Gould recordings.
Inspired by this collaboration at the Sinfonia Orchestra’s performance,
Debbie Davis, cellist in the Lyra Ensemble, Allentown, PA, asked me to
paint Oliver Messiaen’s Quartet for the End of Time during that Ensemble’s
2011 performance.
Abie Harris graduated from NC State’s School of Design in 1957. As the recipient of the 1958 Paris Prize in Architecture he traveled in Europe and studied at the Ecole des Beaux Arts in Paris. Abie taught in the College of Design. As NC State’s University Architect from 1966-1998, he master-planned the original and Centennial campuses. Winner of national architectural competitions, he was the School of Design’s Distinguished Alumni in 1991, was made a fellow in the American Institute of Architects in 1987 and was awarded the 2014 NC AIA’s F.Carter Williams Gold Medal for his work in campus planning. After serving on the Board and teaching at the Penland School of Crafts, he donated his drawings and sketches he made while doing the campus master plan to the school. His architectural drawings and files were donated to the D.H. Hill Library’s Special Collections. Many of his drawings and paintings have been exhibited in numerous shows and have been widely published and collected. He was a founding member of the Roundabout Art Collective and continues to exhibit paintings at Horse and Buggy Press in Durham and his studio in Cameron Park.